Francesca Gentili paints young figures which looks frail, faces that bring out of the skin of the canvas the fragility of the human condition and of the art, the need that they have of care and protection. They do not seduce, if not in the form of a question. The portrait, like any image taken from reality and placed in the aesthetics, represents an idea of duration, of individual and collective memory locked by means of the creative process in the simulated freezing of a moment. We do not know the identity of the portrayed characters, they certainly are the synthesis of a resistance against time, ready to disappear as they appeared. The faces emerge or disappear from the background. The human body appears to be of the same material of the air surrounding it, it emerges and retracts in it, ready to return to that primitive state. Material instability to emotional instability. Faces designed according to a formal reduction in direct proportion to the emotional intensification: undefined outlines, fringed backgrounds, insignificant figure/ground relationship. Those images suggest disturbance, underline a tension. We sense the presence of something inevitable. The viewer is constantly called to empathize and to judge, an emotional involvement that he cannot avoid. The duration, in whatever form it may be, is built every moment through a special relationship between history and memory, present and desire, and if one of these elements is missing, it causes rifts, yielding. Gentili’s faces recall Renaissance faces, from the ephebic ones of Leonardo up to the judging looks of Pontormo and, like these, they are dumb, interact with us through a gesture, a look. For an artist, dealing with the contemporary means going beyond the spatial dimension, the technical in itself, the sheer dexterity: building duration, waiting, wondering. The image makes temporal relations irreducible to the present, sensitive and visible. 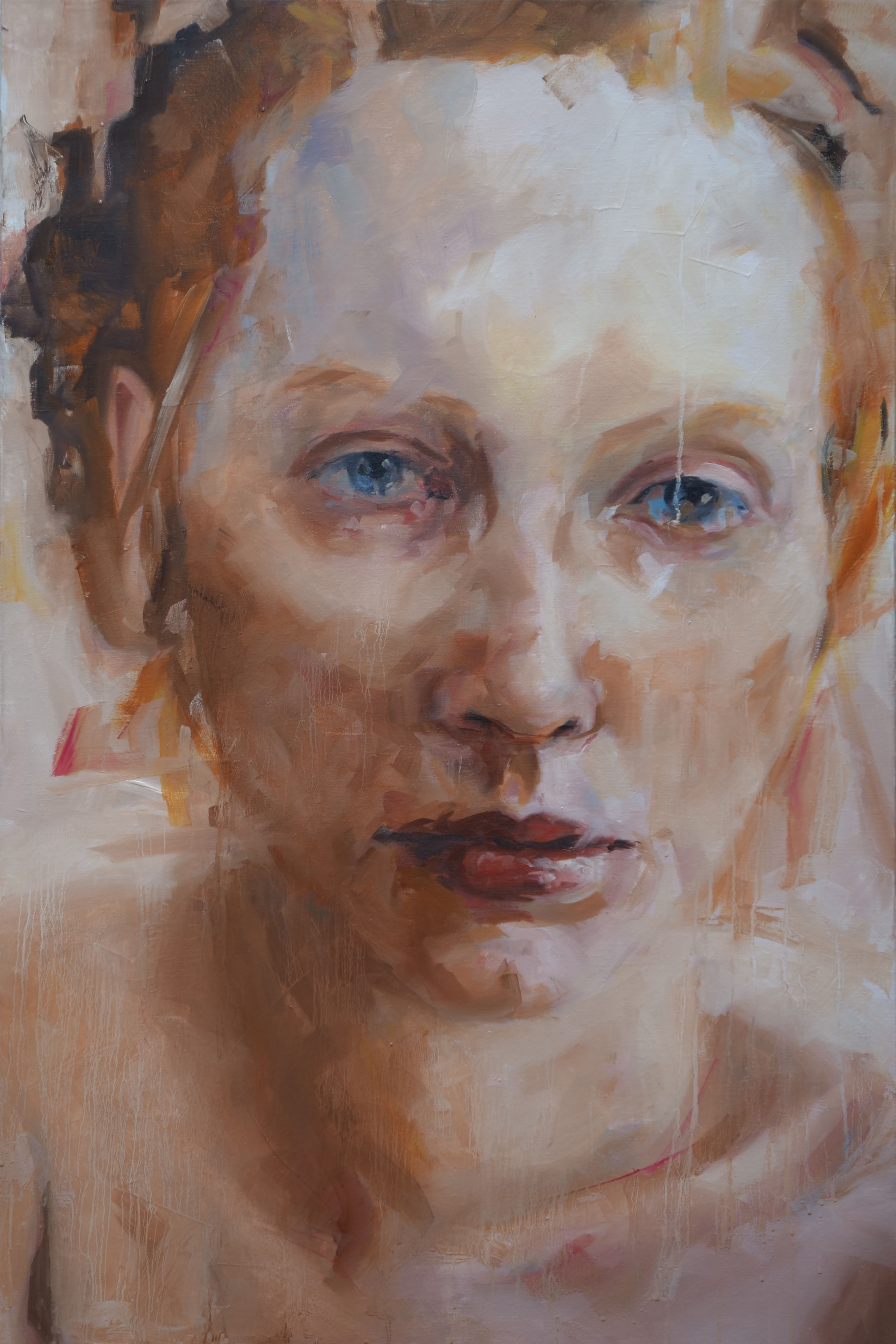 " "I am very interested in the art, but the truth interests me infinitely more ... The more I work and the more I see differently ... basically it becomes more unknown, more and more beautiful. It would be for me worthwhile to work, although without any result for the others, for my personal vision ... the vision I have of the outside world and of the people ... I think to progress every day. For this reason I work more than ever. I'm sure I do what I have still never done before, and that will make superannuate what I did until last night or this morning. You never go back ... It's on the way. Then everything becomes a kind of exiting delirium, as the most extraordinary adventure: if I embarked on a ship to countries never seen and met islands and inhabitants increasingly unpredictable, it would have on me exactly the same effect. I truly live this adventure. So, if there is a result or not, who cares about it? If on display there is a success or not, I do not care. Since for me it is in any way a failure, I would find it normal that others do not even look at it. I have nothing to ask if not to continue without rest. " "Why do I feel the need, yes the need, to paint faces? Why am I – how can I explain - almost haunted by the faces of the people? And that all my life. As an unknown sign, as if there was something to see that you cannot perceive at a first glance. Why? "

THE LOSS OF ELOQUENCE

1.In the last decades painting, more than any other form of artistic expression, has seen questioning - with periodic fury - its own statute. The first organized turbulences were recorded around the 68s. The eruption of the so-called extra-artistic practices, within the climate of widespread sententiousness of the period, comes to proclaim with dogmatic emphasis, the "death of the art". This is because, with the combination of concept / behaviour, they were attempting to assert a more direct approach to reality, in contrast with its "representation", so dear to the traditional artistic techniques. The second blow was dealt to painting in the 90s by the spread of photographic works and videos. Accomplice was also the indiscriminate executive simplification, introduced by the use of digital technologies and it was thought of having dealt to it its fatal blow.

2. We know, instead, what happened. Already in ‘71 –‘72 there was a tremendous shock in the painting landscape (which was thought agonising). His search for a new virginity, after the glories of Conceptual and Poor Art, leads it to a resumption of more popular styles between barbaric temptations and decadent languors. We recall, in this regard, Transvanguardia, Anacronisti, Nuovi-nuovi, Neuen Wilden. Then, towards the end of the twentieth century, it happened that, in response to the risk of a flattening of painting on the register of an aseptic technological eclecticism, its role was found in the dialectics with new media.

3. The work of Francesca Gentili starts from this humus. At the base of her paintings there is always a photographic print. This depends, in small part, from her generation. But, above all, it comes from a stubborn personal vocation, insensitive to changes in taste. From the very beginning, in fact, her program aimed, peremptorily, to the verification of painting, its grammar, its means. This meant, over the years, a tight comparison with the "doubt of painting." That way, that is to say, of understanding art as an inexhaustible wonder about the limits of painting (and its possible mission), but without giving way to doctrinaire lure.

4. In the latest achievements Francesca Gentili leads to the extreme the figurative beginnings flowing into abstraction. With this exhibition, we can see how the transition invests both the means (i.e. painting) and the content of the works. Here she exposes a series of paintings depicting the faces in the first and in the very first order. The looks are hieratic, the attitudes are solemn. The narrative dimension is absent. The faces are without existential ambitions. They are faces that, though faithfully somatic, do not seem to correspond to specific persons. It is, rather, the retinal persistence of visual impressions distant in time. These faces are an inherent presence, categorical. Their artificial fixity, as a mask, reaches an expression that could be called "not eloquent."

5. Fruit of a mature stylistic awareness, the execution is condensed, fluid and vital. Brush and spatula, thanks to a definite technique, trained by a long experience, give colour a structuring force. The hierarchy character/background is cancelled, in favour of an atmospheric and enveloping description. The use of a rarefied tonality, the light treatment of the support and the emergence of the pencil (a sign more allusive than constructive) are all indices of a realistic attention, but not mimetic, to the subject. Because Francesca Gentili points to the synthesis not to analysis.

6. It seems that now Francesca Gentili has reached the stage of confrontation. It is, in short, the time of the development of her final own strategy. We anticipated that now her focus is on the dichotomy figure/abstraction. And the last works, in fact, experience the intersection of these two positions. They intersect, before our eyes, to merge into a kind of timbre osmosis. Finally, they seem to reconcile in the dimension of the "image", of that element that, despite all, they have in common.

7. But the pictures of Francesca Gentili, maintain the anxiety of the threshold. They are, of course, a free zone, an area of transition. However, they disavow the reassuring stability of the definitive agreement. On the side, we can say, "mundane", of these works, there is the representation of the physical world. That, through the recent reduction of painting, it gradually dissolves into a research of essentiality close to abstraction. On the other hand, instead, in terms of meanings, these faces, as stripped to the bone, still respond to a vigorous figurative impulse.

8. Of course, they are images that easily offer identification. The projective mechanisms, to be truly effective, must apply on a recognizable entity, but neutral, at the limit of indifference. Hence the faces with their zero degree of expressiveness. The level of identification, then, goes so far as to reverse the concepts of active and passive, or subject and object. Because, subjected to these silent looks, concave and out of scale, we live a state of unreal disturbance. The dynamic observer/observed flips and we are assailed by a feeling of subtle, instinctive dismay.

9. Perhaps Francesca has set her speech, at the very internal of the laws of art, in order to embrace a wider horizon. Because – Francesca seams to tell us - if the aesthetic experience is an essential part of the more general experience of life, then painting is the sole that can return it to us in full. For the archaic energy that comes from its past. Or thanks to its ability to mediate between the real and the imaginary. Maybe also for its continuous, heroic, technical challenge. Or instead, most simply, for its moving, irreducible, ultimate humanity.